Posted by Lisa Burraston at 9:21 PM 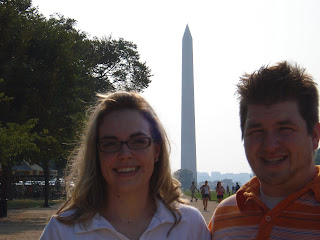 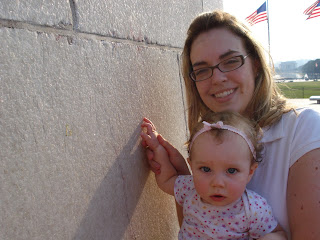 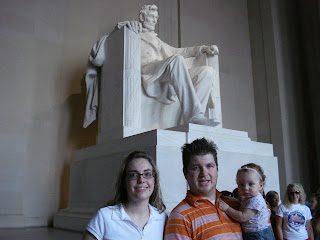 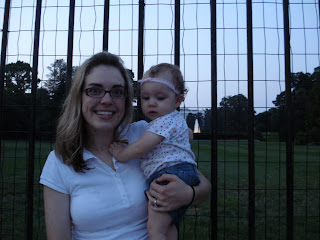 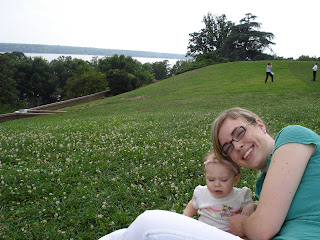 We just returned from our visit to D.C. where we were able to spend time with Kam’s family who are living on Andrew’s Air Force Base. Let me just say, D.C. is one of the most awesome places I have ever been! The city is so beautiful, well kept and clean. There is so much to do, and there is just this awesome, upbeat, fun feeling to the city.

We flew in to on Thursday evening and basically just hung out with Kam’s family. Ellison was being a little difficult when we got there, but she soon perked up and was excited to see everyone! On Friday we spent the morning visiting, going to the BX (a department store on the base) and then spent the afternoon and evening on the mall visiting all the monuments. We were able to see the , the Lincoln Memorial, a World War II Memorial, the wall and the White House. We also saw the Capital building from a far. It was a lot of walking, but totally worth it!

On Saturday we spent the day at , which was totally awesome. We toured George Washington’s house, saw the room and the bed that died in, and toured his home. It was really beautiful and we learned that 40% of the furniture in his home is original…very cool! We also spent that night touring the building Kam’s dad works in on Andrews, visiting his office, etc. and it was so interesting! I also got my hair cut and colored that night, can we say hallelujah! Thanks Tiffini!

On Sunday we said goodbye to Kam’s sister and her family and then headed out to . We toured the museum there and saw all the battlefields. had this awesome historic feeling to it, and it was so green and beautiful. The downtown of was totally touristy, but so cute! We were also able to see the temple along the freeway on our way to , and it was so beautiful. It looks like this castle that is floating above the freeway!

On Monday we went downtown again and visited the Holocaust Museum which was so interesting and then tried to go see Ford’s theatre, but it was closed, however got to see the outside of the building, as well as the building where Lincoln died. After walking past the theatre, we went to the , and played a spy game, which was so fun. We had to find our way into the game by pushing on the wall and then once we were in the game, we were taken around by our “Field Officer.” We had to follow a double agent who had a meeting with her cousin on video equipment, then we had to “break into” an office and diffuse security camera’s, rifle through papers, and find a “trigger” to a “nuclear bomb” that was going to be sold. We then “jumped” into the back of a van (which was really just a moving room) and were debriefed about things we found in the office. We then went and “conducted a lie detector test” on the double agent. After that, the game was pretty much over. It was so much fun! Kam, Ellison and I headed home with Kam’s mom after that to meet my cousin Shelli, her husband Lige and their two little ones Liam and Remy, as well as Lige’s little sister . It was so fun to visit with Shelli and her family. Her little ones are so cute!

Tuesday Morning we went to and saw the changing of the Guard, which was totally awesome. I have to relay a funny story. During the changing of the Guard, they ask you to remain standing and silent out of respect for the Unknown Soldier. Well, Kam’s brother Kory decided to bend down, I think to get a better shot with his camera. Well, one of the soldiers announced that everyone needed to remain standing during the ceremony, directing the comment at Kory. We then went into and hung at the mall a minute or town to grab something to eat, and kill a little time before the flight left. We flew home on Tuesday evening.

We had a great time. We played some emotional games of Settlers, drank lots of Slurpee’s and heard people randomly singing the “milkshake song” throughout the trip. Of course we all came home with colds, but also a lot of really great memories! Kam, Ellison and I can’t wait to get back!

Settlers will get you every time, haha! I'm glad you guys had a good vacay. When I was in D.C. the changing of the guard was one of my favorite stops. I'm totally with you, though, I love visiting monuments and memorials, and so many different museums and everything. There's just so much to learn, you could easily be there for a month and not run out of things to do.

And Elli looks too cute!

What a great trip! It sounds like you had so much fun seriously. Chad and I really want to go to DC - I am sure we will make it there eventually. I am glad to hear the city was clean that makes everything historic there even better I am sure. I am glad you guys made it back safe. Did you put gel in Ellie's hair to get it to curl a little? Sooooo cute.

So that's what happened in the spy museum?! Your so good to remember all that, it was kinda funny cause while we were waiting for our plane us 3 were trying to remember the order and all we had done, there was just so much. It took a min to remember it all. And after our long trip home we were very jealous yours only took 3 hours!! We had a blast and it was so fun to see everyone. Kory's over the settlers, and it won't be back out for a while!!!

What a fun time you guys had. Isn't it fun traveling with a one year old? We are going to Disneyland in November with my three kids, I am not looking forward the the drive. Anyways, glad you guys are doing good. Things at Rehab are good. Flor and Mandi are still around. Can you believe it? I love working with Virgil though. See you later.

Looks like you guys had a blast! I love the pictures and you look beautiful!

Lisa- How are ya? It sounds like you had a blast in DC. It is so great to read about you and your family. It has been a very long time. Lets catch up.